Lovelyn Nwadeyi on the youth and politics 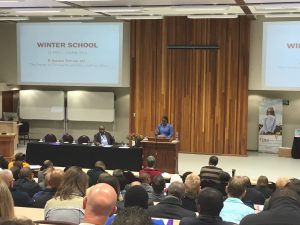 Lovelyn Nwadeyi is described as a young, public intellectual and she was a keynote speaker at this years Winter School in Stellenbosch. She started off by telling her own story and her involvement in the student protests last year. She described her own disappointment when her church did not support her effort, or engage in conversation with her, during this time.

She believes that churches cannot be neutral in politics. The youth will not be at home in church if there is no voice about social injustice. The church will lose the youth if it does not engage in the issues that the youth struggle with. She asked the question: “Why were certain churches silent or passive in the conversation and protest on US campus (#feesmustfall or #openstellenbosch)?”